As many of you know I again have the honor of being a Speaker AND an ambassador for the RootsTech 2019 Conference. It is the largest genealogy conference in the world! What an opportunity to see amazing speakers plus be surrounded by those who appreciate the hard work, joy and fun that comes from researching your family’s story.  People who will listen to you talk about your research and NOT have their eyes glaze over – tee hee!!!!

One of the benefits of being both a speaker and an ambassador is that I get to grant one of my lucky winners a FREE 4 day pass to RootsTech to be held from February 27 through March 2, 2019 (a $299 value)!

Pass does not include the following:

If you have already purchased your ticket, please still enter! You will be reimbursed your ticket price. A great chance to WIN!!!!

To enter my giveaway??  Please just provide your email on my website Lineage Journeys!!!   I will randomly draw a winner’s name from the submitted emails (if you are already following my blog and have submitted your email, just let me know that you want IN!) – drawing on Tuesday, October 30th!  The winner will be notified by email (and then I want to talk with them!) and everyone else will find out here in a post.  So sign up to win!!!!  Yes, YOU!! 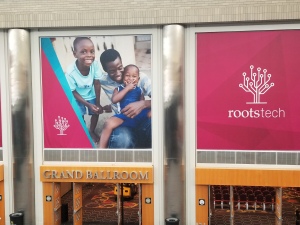 The early bird deadline is TODAY – so get a lower price by registering now here: https://www.rootstech.org/

AND my next post is about my FREE giveaway of a full pass to RootsTech 2019 – I’ll announce the winner by October 30th so watch for that post and enter!!!

How is this night different from all other nights?  One of the four questions of the Passover Seder …. While I’m not Jewish, I am reflecting on this weekend beginning with Passover tonight and its story, and what I have learned about the Seder from dear friends who have shared some of the traditions and foods of this important event.  As a genealogist, I’m recognizing that in the long history of my ancestors over thousands of years, I have Jewish ancestors.  My AncestryDNA results also indicate that I have Ashkenazi Jewish heritage – a low percentage (<5%) indicating a distant connection – but nonetheless, it doesn’t surprise me as early Christians were Jewish.  And, because of my Eastern European DNA, it is likely that it comes from there.

So I’m celebrating the beginning of an ancient commemoration.

Earlier this month, we celebrated the spring Equinox, honoring our relationship to the Earth, the changing of seasons and our Native heritage, family and friends.  AND I will be celebrating Easter in my faith community and with mom on Sunday.

Whatever your beliefs, faith tradition or thoughts about all things spiritual or religious, wishing you the beauty and freshness of the spring growth, earth awakening and return of green grass, baseball and flowers.  May you have love, peace and beauty in your life!

An exciting morning program here at RootsTech 2018 helped to wake me up – my energy is beginning to fade!!  NATALIA LAFOURCADE!!!!

Yes, I know it’s not the best picture but Natalia Lafourcade (Mexican pop-rock singer/songwriter) sang the song from Coco that had us all in tears – and FamilySearch did research about her to share.  She found out for the first time that she is descended from a French man who came to Chile, eventually Mexico and Natalie was born there.  Natalie has many musicians in her ancestry too.  Her talent/her voice is amazing!!!  Wish I’d gotten a better picture of her but this picture is when she found out about her ancestry….so cool!

How so very cool that Dr. Henry Louis Gates, Jr. came to speak at the conference!  He has been such a pioneer in developing the relationship between genealogy and genetics!  He shared about some of the miracles that have happened even as recently as yesterday at the Family History Library!

We got to see the trailer/teaser for the next ( coming this fall!) season of “Finding Your Roots” – looks incredible.  LOVE the show and it teaches me about records that are available to all of us AND the DNA evidence that can help us fill in our tree too.

All in all, it’s been a really marvelous conference!  I’ve enjoyed the networking, learning and the opportunities to connect with people who “get” what I love to do – genealogy!!!

Source: Advice to White Supremacists: You Might Not Want to Test Your DNA

I was thinking, praying about these recent events and remembering some key times as a genealogist in California. I volunteered in a Family History Center as I could translate French and German and the Mormon volunteers had asked me to help out once per week.

As my contact with customers, through Lineage Journeys, evolved over the weeks and months of volunteering, we began to have a fairly steady flow of people from a particular area of town. Known to be descendants of those who migrated to California during the Dust Bowl era, they were descended from people primarily from Oklahoma, Missouri and a few from northern Texas. They came in, as one of them told me, “to document our superior family” …. hmmmm, “superior” equated to “white” and their conversation indicated that they were affiliated in some way with white/neo-nazi groups that I knewto be in the area.

It didn’t take long (perhaps three generations of ancestors) to find census records that indicated “mulatto” – the term used for mixed race individuals on the old census records. Explaining that to these research customers became my personal, silent joy as their visions of superiority were revealed for the arrogant falsehood that they were. Many of them stated variations of “the records were manipulated” or “the census taker lied” or any number of other ways to avoid the obvious.

The fact that “race” isn’t a scientific or biological fact anyway would have been lost on these families, and my personal and professional research experiences had long before shown me that our families migrated, lived in many communities, searched for jobs and good work, and married across religious and ethnic lines for centuries. No surprise here that some “white” people had relationships in the past that weren’t with those of European origin.

Lineage Journeys helps you to find your way – to ancestor names and places, their faith tradition, where they lived and worked, and what their lives were like.